“A new camera will not make you a better photographer. Only YOU can do that. And it’s not done by reading the rants and raves on every new piece of gear that comes out each week. So shut down that MacBook, grab your camera and get out there and make some magic happen!”

I would have shut down the MacBook, grabbed my camera and went outside to enjoy the day to take pictures but unfortunately, the rain decided to foul the plans. So instead, it was a baking day.
We’ve gone the yuppie route and own a bread maker and are determined to bake every recipe in the book. There are still a lot of bumps and hurdles that we have gone through and have yet to find the perfect recipe but we’ll keep trying. Today’s delight was the standard French Bread. We would have had bread first thing this morning due to the wonderful timer but we accidentally made it with “white whole wheat” flour. That was not a good idea since the loaf came out like a brick. So instead we had lunch bread with the correct “white bread flour” and had a nice, warm loaf for lunch. One draw back with all the breads we’ve made is the tough crust…it’s great when freshly out of the machine but a few hours later, not so much.
I’m looking forward to making some beer bread…that should be next on the list 🙂 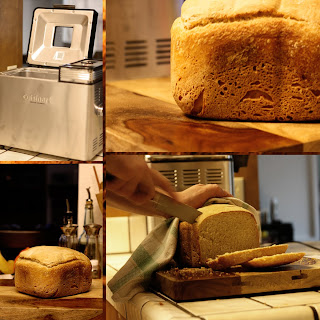